THE INDEPENDENT AUTHORITY AGAINST CORRUPTION OF MONGOLIA RECOVERED USD 33.8 MILLION AS OF NOVEMBER 2021 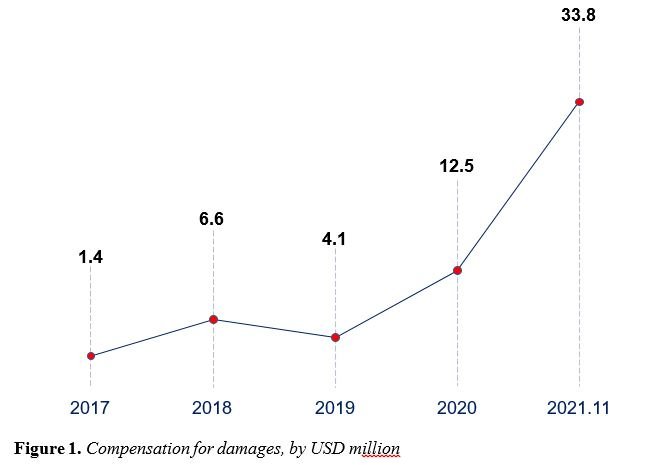 As of November 2021, USD 33.8 million in damages have been reimbursed, said Mr. Azjargal, Deputy Director-General of the Independent Authority Against Corruption(IAAC) of Mongolia.

This year, International Anti-Corruption Day is marked around the world with the theme, “Your right, your role: say no to corruption”. The IAAC of Mongolia organized the “National Anti-Corruption Forum-2021” on December 8. Mr. Azjargal participated in the forum and made a presentation on “Anti-Corruption Policy, Activities, and Results”.  He emphasized that “compensation for the damages caused by corruption crime is a key international and national strategy to combat corruption” and said that “Compensation is an important factor in establishing social justice, even if it does not fully heal the damages done to the integrity of government, democratic values, and the opportunities that citizens should have. The IAAC has paid special attention to compensation for damages caused by corruption crime, and  reimbursements have amounted to USD 4.1 million in 2019, USD 12.5 million in 2020, and USD 33.8 million in the first 11 months of 2021”. This means that in 2021, about 20 percent of the total damage caused by corruption has been compensated.

The need to work with both domestic and foreign law enforcement agencies to investigate corruption cases, recover damages and stolen assets is a pressing issue today. This is because corruption has spread beyond the national level, and criminals are using not only physical but also intangible and electronic means of payment. The involvement of international banks, financial institutions, the public and private sectors in these illegal activities is increasing every year.

Mr. Chinbat, Deputy Prosecutor General, who participated in the forum, said, “There are many types of cash and non-cash assets illegally acquired as a result of a crime. In particular, corruption crimes include the acquisition of shares in banks, large enterprises, and deposits as gifts, transfers to others, making a profit through the rights earned, or depositing shares in offshore accounts through others, and immovable property in the name of one's family or relatives. The transformation of corruption, such as the acquisition of assets and shares, and licenses, is often organized. In order to reduce corruption, it is important, firstly, to train prosecutors, and secondly, to improve the quality of investigations and to ensure that all cases are resolved as soon as possible. The damage caused by the crime must be properly calculated and reported.”

Mongolia has signed 36 agreements with about 20 countries on 4 types of mutual legal assistance in civil and criminal cases, transfer of criminals, and transfer of convicts. These types of bilateral agreements need to be further expanded and deepened.

Mr. Azjargal concluded that Mongolia has cooperated effectively with several countries under the UN Convention against Corruption, in particular in the areas of recovering stolen assets and information exchange. In addition, Mr. Dashdavaa, Director General of the IAAC, told “Daily News” that a total of MNT 20 billion (USD 7 million) has been returned from four different countries at the current exchange rate, including apartments, houses, and cash. He also said that in addition to compensation for the damage caused by the perpetrator, the penalty of confiscation should be legalized in the Criminal Code.